Just a page where I can keep track of my discoveries here on the Eastern Shore and at the Wabi-Sabi Ranch.  My memory is not what it used to be, and I often find myself looking up the same flowers or trees or animals over and over before it sinks in.  This page might make it easier for me to remember, or at least make it easier to look up something I’ve already looked up several times in the past.

During the summer months, I saw the occasional Bald Eagle soaring overhead.  In December 2013, I had the good fortune to witness three Bald Eagles dancing, whistling, and flying in the sky over the woods and meadows at the front of the property.  It was an amazing sight, and I watched them for at least an hour.  The Bald Eagles begin preparing their nests in the fall, and lay their eggs in January.  The number of eggs depends upon how good the fishing season happens to be.  If it’s a good season, they will lay up to three eggs, and I’ve been told that there is a nest in the area where the eagles had four eggs which is pretty rare.

The Eastern Box Turtle is found exclusively in North America.  They are omnivorous creatures who eat all sorts of things including snails, eggs, birds, berries, roots, flowers, and fungi.  They may live more than 100 years.  One of the things I find fascinating about them is the hinge on the shell.  When frightened, they can duck inside and close the door, so to speak.  Box Turtles can be poisonous to eat (not that I’d want to eat one) because they eat poisonous mushrooms and the toxins may linger in the parts you’d eat if you were to eat one.

2016 June 22.  Finally!  A large butterfly visiting the butterfly bush.  It was an Eastern Tiger Swallowtail (Papilio glaucus).  I planted the butterfly bush in the scrounger’s garden three summers ago, and this is the first time I’ve had a swallowtail visiting it (that I know of; they could be sneaking out there when I’m not around).

Argiope aurantia, what I know as the Garden Spider, is also called a Corn Spider, a Yellow and Black Garden Spider, and, my favorite, a Writing Spider.  This particular beauty stationed herself outside of one of the guest room windows.

I frequently see these little guys in the scrounger’s garden around the end of June when the lavender, zinnias, and butterfly bush are blooming in full force.  In folklore, hummingbird moths are seen as a good omen.  The larvae like to feed on honeysuckle plants.  I’ll have to keep an eye out for the horned caterpillars (which are green with a dark red spot and green lines on the body).

Danaus plexippus (the scientific name means “sleepy transformation”) will hopefully continue to be a visitor to our gardens.  Pesticides, loss of habitat, and climate change are bringing down their numbers.  To help, you can plant milkweed.  Visit Live Monarch for seeds and to find out more about the Monarch’s plight.

The Northern Mockingbird is a source of entertainment around here.  This guy has quite a repertoire of songs.  Males may learn up to 200 songs during the course of their lives.  Pretty amazing.

The Partridge Pea is a native, upright, annual legume, that routinely appears on recently disturbed land.  The seed pods of the Partridge Pea, which ripen by late October, are a winter food source for the Bobwhite Quail.  White-tailed deer can and will eat it, too.

Persian Speedwell is native to Eurasia, and generally seen as a weed.  I happen to like the tiny, and very pretty, blue flowers.

November 2013.  The pictures are not very good, but good enough to help me remember this bird the next time I see it.  They are common in this area and eat mainly insects, spiders, and other arthropods.  They will also eat seeds, nuts, and fruits.

Summer 2013.  There were a lot of Red-Spotted Purples in the woods at the Wabi-Sabi Ranch during the month of August.  I have seen it described as a “beautiful forest butterfly,” and think that sums it up well.  As a caterpillar, on the other hand, it’s not quite as beautiful.  The females like to lay their eggs on the tips of cherry or willow leaves near forest edges.  Red-Spotted Purples feed on fruit, flower nectar, sap, dung, honey-dew, carrion, and decaying wood.  Males will gather together around a mineral rich patch of muddy ground, dung, urine, or carrion.  This behavior is called “puddling.” 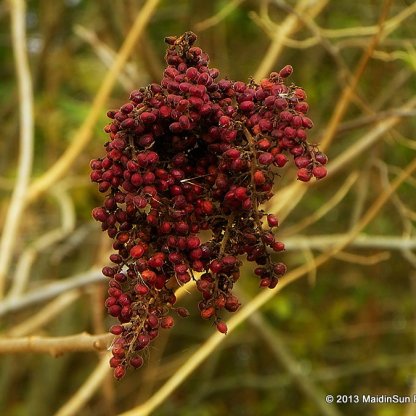 I’m not sure what type of Sumac this is.  My best guess is Winged Sumac (also known as Flameleaf or Dwarf Sumac).  The berries provide food for a variety of wildlife during the winter months.  I’ve seen Eastern Bluebirds eating the berries on several occasions during the late fall of 2013.

The Turkey Vulture is also called a Turkey Buzzard or just plain old Buzzard.  We have plenty of them around here, and I’ve seen large flocks of them roosting in the trees or sunning themselves on a rooftop.  They are great scavengers, and I enjoy watching them as they glide around in circles. 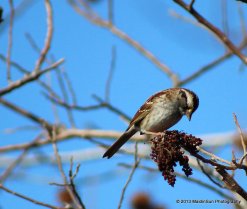 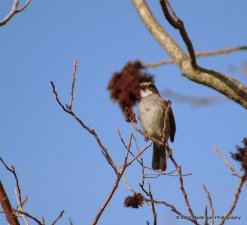 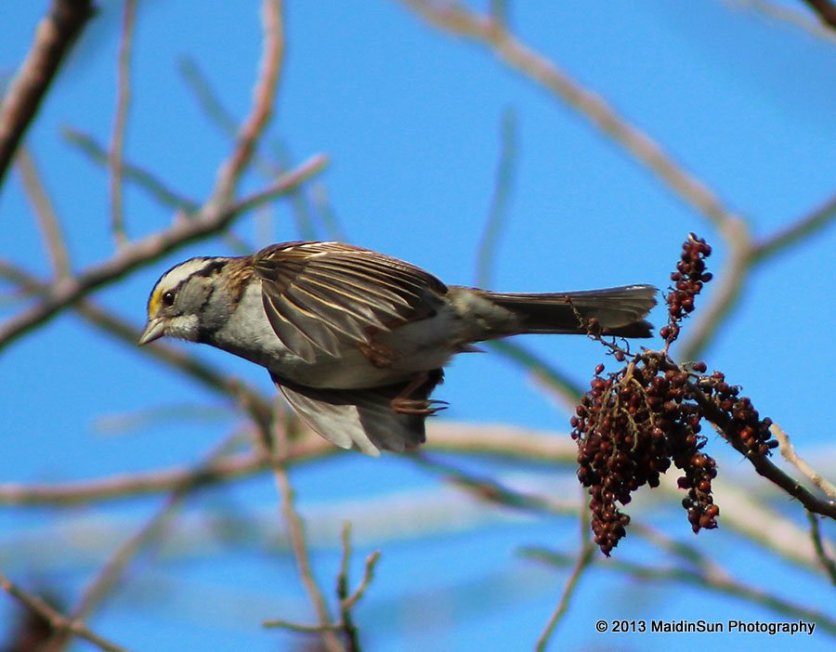 January 2014.  The White-Throated Sparrow is, to me, a friendly bird.  I have no trouble capturing one with the camera whenever I’m out and about on my daily walk.  They feed on the seeds and weeds of grasses, and really seem to like the sumac berries.

15 thoughts on “Animals, minerals, and vegetables on the Wabi-Sabi Ranch”

"To be loving we willingly hear each other's truth and, most important, we affirm the value of truth telling."

The Murmur of Bees

The Inner Tradition of Yoga: A Guide to Yoga Philosophy for the Contemporary Practitioner

The Rules of Magic: A Novel (1) (The Practical Magic Series)

Skill in Action: Radicalizing Your Yoga Practice to Create a Just World

The Spell of the Sensuous: Perception and Language in a More-Than-Human World

Zen Camera: Creative Awakening with a Daily Practice in Photography